The following article was written by Jean G10.

Advertisements. We’ve all seen them, they’re everywhere. They’re on the big billboards seen by many drivers, on the buses that drive through the city, on television during TV show breaks or even on your Instagram feed. But as boring as they might be, we’re all influenced by them. At least I know I am. As a girl, I grew up with a love of fashion. From time to time, I would look through magazines and different media to get some inspiration, and advertisements were definitely one of the big influencers on us girls. Two of the advertisement that has recently grabbed my attention because they promote the same issue but do it so very differently are Victoria’s Secret and Dove campaigns.

Victoria’s Secret, is a sexy lingerie brand that’s well known by females all over the world. Their models or as so-called ‘angels’ are looked up to by many girls and loved by many boys. These angels all have the ‘perfect body’ as one of their 2014 advertisement suggested.

This advertisement campaign shows 10 different models wearing the ‘body’ collection of the brand with the phrase The Perfect “Body” printed across the poster. All of these girls are tall and slim; they have the perfect body, as the ad itself said. However, not so long after the release of this ad, as many as 27,000 people came forward on Change.org and asked Victoria’s Secret to change the slogan as well as an apology for this body shaming advertisement.

This was a trending topic on many of the social media, including Twitter, one of the social media platform used by many people of different age and gender all over the world. Cinthia Novick, a twitter user tweeted saying “#iamperfect @VictoriaSecret Harmful campaign. I am not perfect and I don’t expect it either. What a shame!”. Not only on twitter but also on the brand’s Facebook page where a user named Stephanie Connolly left a comment saying “Just seen the ‘perfect body’ advert……and here’s me thinking that the perfect body was the one I felt comfortable in……oh well better get back to throwing up my dinner!”. Even I would have to agree with these comments.

Owing to that, Victoria’s Secret did change their slogan to ‘A body for every body’ but no official apology was made. There’s no doubt that VS angels are beautiful but really Victoria’s Secret? Do you think all girls can just simply look like that? Not all of us are born 5’8 tall and weigh 112 pounds. 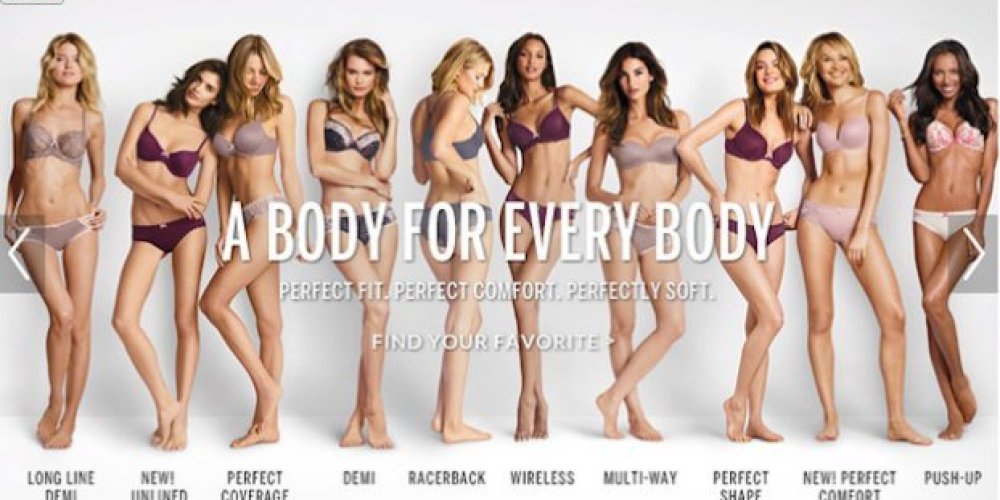 With the brand’s franchise all over the globe, along with their annual fashion show that many girls looked forward to every year, I’m confident to say that this brand is very influential on the body image of many girls. According to StatisticBrain, 10% of the customer made a purchase without even using the fitting room. This means that their decision was purely based on first impression and possibly done by advertisement. As state by to Business Insider, Victoria’s Secret 2014 annual sales was as high as US$6.6 billion and this was the same year that this campaign was released. Not only with this specific campaign, but the portrayal of the model’s body type from this brand is basically telling every girl out there that this is what is considered sexy, this is what they should look like.

On the other hand, Dove, a personal care brand that is also well known globally, released a very similar but yet contrasting campaign called the, “Real Beauty Campaign”.

This campaign shows women with different skin color and body type but as stated by the campaign name, are all are considered to be beautiful in their own ways. It’s clear that the women in Dove’s campaign aren’t as skinny and tall as the girls from the VS campaign and don’t look as appealing. However, Dove’s campaign received a very contrasting feedback comparing to the Victoria’s Secret campaign. The responses were very positive as one of the twitter user named Ali Levy tweeted saying “I am perfect the way I am” These are words women do not say enough. Thanks for trying to change that @Dove #iamperfect”. Despite the fact that this campaign uses realistic body images that females of different color and sizes can relate to, it doesn’t have the lure and appeal that the Victoria’s Secret campaign has.

Although it is very interesting to see the 2 very different brand showing their perspective on the meaning of beauty, it is also very shocking the impact these campaigns made. With the issue of beauty standards and body image being thrown around as conversational topics these days, it’s almost certain to say that everyone will bash Victoria’s Secret campaign and say that the Dove one is the beauty standard we should teach girls these day. However, many girls are still trying to look like the Victoria’s Secret model as that is the beauty standards that has also been set by many of the fashion brands. I’m not going to lie and say that I’m not influenced by these campaigns at all because I am. I do buy Victoria’s Secret products and I do watch the Victoria’s Secret Fashion show every year. As a part of this generation, I am surrounded by media all the time and, of course, I am somehow going to be influenced by them.

With these 2 examples, we can clearly see the impact advertisements have on the society, especially young teenage girls who can be easily swayed by the media they’re exposed to. Not only these kind of advertisements that promote the ideal body image but also other advertisements that set the unrealistic beauty standard of women in the way they should look, dress and behave. Although it might be a long way to go, I hope one day our society come to the acceptation that there is no beauty standard because we’re all beautiful in our own unique ways despite our very different features.