1) When you crawl out of your bed in the morning, you are at your tallest. On average, you are almost half an inch taller when you’re awake in the morning compared to your height at other times during the day. This is because of the excess fluids that are released between your spinal discs. However, as the day passes by, your body has to deal with the stress of standing and doing various sorts of activities which cause the discs to compress. When the  discs compress, the fluids seep out, and thus, you lose that extra inch from your height.

2) The color of your blood is red due to the iron in the blood that is bound in the hemoglobin, known as porphyrin. It is this shape of the structure that produces the “red” color of the blood. The redness of the color is dependent on how much oxygen is bounded to it. Depending upon the presence of oxygen, the shape of the porphyrin changes, therefore giving the red blood cells a more authentic shade.

3)The salivary glands in the mouth produce an average of a quart of liquid per day which is more than enough to fill up two medium-sized bathtubs a year. However, the production of saliva substantially varies from person to person and from time to time depending upon the circumstances. Conspicuously, you produce a lot less saliva when you’re asleep, dehydrated, or when you start to age. Gross, but interesting!

4)When you’re first born, your body consists of 300 bones. However, as time passes by, most of your bones fuse together in order to create one bigger bone. That is why an adult has a total of 206 bones. Another fascinating factor associated with bones is that they are even harder than steel! A bone that is the size of a matchbox has the ability to support 18,000 pounds. In comparison to concrete, human bones are considered to be four times greater in terms of support strength.

5)Your outer covering (basically the skin) is an organ, just like the liver, kidneys, and the heart. An average man has adequate amount of skin on his body that can cover approximately 20 square feet. For women, the skin can cover roughly 17 square feet. Out of your total body weight, 12% comes from the skin. Also, your skin replaces 45,000+ cells in only a few seconds. Your skin is persistently growing new skin while shedding the old skin at the same time.

6)Human beings have the same number of body hair as a chimpanzee which may be hard to believe as the hair on our bodies is barely visible. We aren’t really sure as to why exactly we lost our protective fur. However, according to earlier studies, it was discovered that losing body hair may have caused humans to sweat more easily. Conceivably, the most attractive idea is that early humans required cooperation when they moved to the savanna from the trees. An ideal example would be that when animals breed for cooperation (like we once did with wolves to produce dogs), they become like their infants. In an enthralling experiment that was started in the 1950s, Russian foxes were bred for docility. Over the span of time, the adult foxes became more like large cubs who spent time playing and developing drooping ears, tails that were floppy and coats that had different patterns. Similarly, we, humans, have characteristics that we inherited from infantile apes such as- large heads, fine body hair, and even a small mouth! 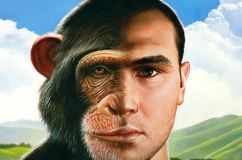 7)Goosebumps are a vestigial trait of our evolutionary ancestors. They transpire when tiny muscles around the base of each of our hair tense and pull the hair upright . If we had the polar bear fur, the coat would fluff up and more air could be able to get into it, making it a relatively better insulator. However, since we have fine body hair, goosebumps make our skin look queer. Analogously, we acquire the same bristling feeling when our hair is standing upright on our hands and legs,r especially in situations when we’re encountering emotive memories or nervousness.

8)The brains of humans have the potential to generate energy and electricity even when we’re awake, which makes it possible to be able to light up a bulb successfully. Your brain operates on the same amount of power as the 10 watt light bulb. Human cells can hold as much as 5 times more information than the Encyclopedia. According to scientists, the storage capacity of our brains ranges from 3 to 1000 terabytes which is pretty impressive in terms of the memory power. Only if we could make use of these factors accurately. Starfish, in contrast to human beings, do not own brains at all!. This makes them lucky in terms of the issues that are associated with the mere existence of brains. Seems like a boon in disguise!

9)In spite of what you’ve been told, you have more than 5 senses. Consider this simple example;  Keep your hand a few centimeters away from hot iron. None of your existing senses will tell you that the iron can burn you. Yet, you can feel that the iron is hot and that it shouldn’t be touched. This sixth sense are the heat sensors in your skin that can also help in detecting pain. Moreover, if you close your eyes and are told to touch your nose, none of the five senses tell you about where your nose is. Instead, it is the sense of proprioception that has the capability to detect where different parts of our body are located with respect to each other. Proprioception is a meta-sense that combines the knowledge you possess in your brain and helps you locate different body parts without the use of the basic senses. Without the use of the five main senses, you can still unerringly guide a hand to touch your nose.

10)Humans creep spiders out: Okay, I’ve not written it the other way round. It’s just that it’s true both ways. Every time you look at a spider, you tend to get the creepy vibes. However, when a spider comes in contact with human beings, it runs back to its shelter in order to clean itself from the germs of humans. Sounds bizarre, but it is true as biology explains.