As we are gradually embracing the technological and scientific innovations of the 21st century, it is important to know of some of those innovations in order to catch up with the constantly changing world. Thus, I bring to you the first topic of the science and technology articles in KISToday: DRONES!

According to innovators and scientists, drones are “Unmanned Aerial Devices” (UAVs) or “Remotely Piloted Aerial Systems” (RPAS). But in simpler words, drones are basically machines that are flown (usually for military purposes) without an actual pilot inside. Instead, it is controlled remotely from a base somewhere on the ground. Drones are really useful when it comes to situations in which the flight is too difficult or dangerous for a person to manually pilot it.

How exactly do drones work?

Drones have multiple sensors attached to them because since they are unmanned, they would need some kind of visual image sent back to the base where the crew pilot the drones.

Some examples of sensors are color camera, black/white camera, image intensifiers, radar, infra-red imaging for situations without good lighting, as well as lasers for targeting (if it is an armed drone). 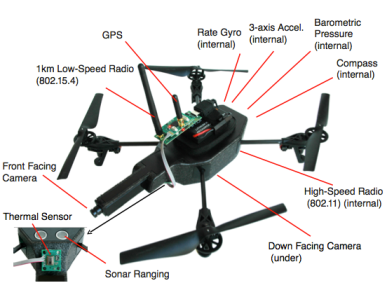 A typical take off and landing sequence of a drone would be the following:

That’s it for now, and I hope you learned something new from reading this article. I will continue to write about technology news, as well as fun science facts.