The following article was written by Vikram (G10) as part of an English assignment.

Do you ever watch a movie or an episode of a series, and think, “Damn, this character is incredibly ripped” or, “this character really is badass…I wish I was him”? Don’t worry, we’ve all been there, fantasizing about our heads on a superhero’s body, lifting buildings and throwing cars. Everybody obviously knows that’s fiction, but what we really take from it, is that we are lacking in some way, so we try to improve ourselves by trying to turn ourselves into these characters, by either dressing up and behaving like them, or incorporating little bits of their personality into yours. This can have very negative impacts, and can cause real damage to a person.

People are influenced by what they see on the big screen. That has been the general understanding since the late 1900s, when films began coming out. When you watch a movie or a TV show, you might think about the characters, and how awesome they are, regardless of their moral stance. Usually, when you talk about these characters, you’re discussing how cool and tough they are, how buff they are, and most importantly, how masculine they are. While the discussions may remain short, it stays in your head. The hero’s perfection lingers in your mind until you no longer feel satisfied with yourself. Every average Joe watching Captain America or Man of Steel probably has probably thought, “I wish my body was like that” or “I wish I was tough and brave like that”. When you start thinking like this, you start wondering why you aren’t like this. You start wondering why you aren’t masculine enough to be Captain America or Superman. To fix this, you tend to change yourself to be more like your idol. This can be done both in the forms of cosplaying (dressing up like other characters and behaving like them) or just by incorporating the character’s personality into your daily lives. For example, a man watching Star Wars might tend to buy costumes of characters such as Darth Vader, and pretend to be him. This probably makes him feel superior to what he really is. This is also incorporated in his daily life, by changing his usual behaviour to that of the character. Take Oliver Queen (Arrow) for example, this character does not generally show much emotion. Men who idolize him will also not show emotion or pain in their daily lives. If they are stuck with a dilemma, instead of asking for help or showing that they’re are stuck, they’ll tend to keep it to themselves. If they’re going through emotional pain or trauma, instead of dealing with their problems with help from others, they would tend to keep to themselves. This isolated state of mind occurs because it is very easy for you to be influenced by your TV.

The reason y’all get influenced by these characters so easily is because of the way they are portrayed, so similarly in every…single…movie. Does the following sound familiar? The protagonist (played by a ripped actor, of course) is faced with a huge dilemma, which he takes the whole movie or episode to figure out, and eventually, after using his strength, courage, and of course, with words of wisdom from the girl, saves the world. Now that’s all fine and dandy (well, not really, but that’s a whole different topic) but what message does the production of movies exactly like this communicate to the audience? Consider the following movies: Baywatch, Guardians of the Galaxy, Thor, The Legend of Tarzan, Batman v. Superman: Dawn of Justice (this one had two!), The Man from U.N.C.L.E., San Andreas, Spectre, any Mission: Impossible movie, and Jurassic World. These are just a few examples I thought of (which all came out in recent years), but there are many more that I did not mention. I have absolutely nothing against these movies, they just make really good examples. Now, what do all these movies have in common? That’s right, they all, more or less, followed the scenario I described earlier. If Hollywood keeps making movies like this the male audience has no choice but to understand this stereotypical male protagonist as the ideal man to be. If all a man does, is watch these movies and TV shows, it’s no wonder that you want to be the heroes. These characters also tend to have great social lives, with many friends/people to rely on, and a main love interest, who is almost always a depiction of the perfect woman (again, a whole different topic). If you don’t necessarily have all these qualities, it is reasonable that you would try to change yourself and turn into these people. This can actually have some really bad consequences, which is something you should consider.

The idea of idolising characters from movies can also lead to several negative impacts, perhaps more than positive ones. When people dress up and start acting like their favorite superhero, or their favorite Star Wars character, they don’t stop and consider the bad messages they are sending to themselves. When a man cosplays as his idol character, he doesn’t realize that this shows what he lacks. He doesn’t realize that he is idolizing and wanting to become this character because he feels that the character is better than himself. It suggests that this man lacks certain qualities, and compensates by personifying a character who possesses the certain qualities that the man lacks. If an average-bodied man or boy cosplays as Wolverine, this suggests that they do not only lack the ideal physical capabilities, the bravery, courage and toughness that Logan has. This is an issue because they begin to change and alter who they really are. They begin to discourage their true personalities, and try to take on the personality of someone who is nothing like them. The reason that this is so important, is that if people try to change themselves, they won’t truly be happy in life. 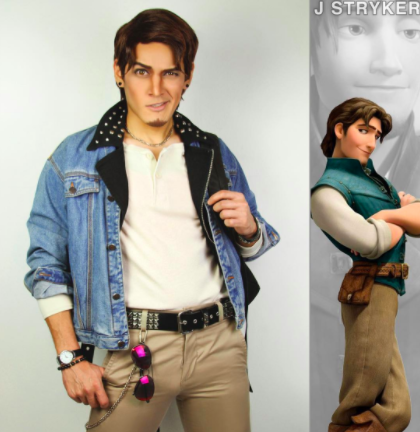 This issue doesn’t really seem like a big deal, I mean, come on, it’s just about people dressing up like other characters. Everybody does that! I do that! But the thing is, if you really think about it, and think about the consequences, it has the weight to cause some serious mental problems. The reason you get so easily influenced, is because Hollywood keeps producing the same stuff, over and over again, and eventually, this is all you see. When people love characters, they tend to dress up like them, and try to change themselves to become them. This isn’t the best idea, because it can make people unhappy with themselves, if they see the unrealistic ideals set up by Hollywood. So, the next time you cosplay as Batman or Superman or anybody else, keep in mind that you should be doing it just because you love these characters, not because you want to become them!