The following article was written as part of an English assignment.

Picture this: a luxurious coat –thick and pink– with high heels, gold-rimmed glasses, and finally bedazzled with two rings covering an entire finger. Now how about a stylish striped suit with a red bow. Automatically, you would think that someone wearing an oversized pink coat would be female and someone wearing a suit would be male, yet in this situation it’s the complete opposite. In fact, the 2015 campaign for the brand name “Acne Studios” features a boy wearing the pink coat ensemble. As for the girl in the suit, well, she has a following of 41.4 thousand on Instagram. Nowadays, different forms of self expression from a range of media, are blurring and blending how males and females are depicted. This new age of not only fashion, but gender identity, is redefining our society. What was once applauded for being normal and staying within a binary code, is now embraced as a difference, showing that there are no boundaries or limits for individuals. Media has started to shift its view on gender roles and identity – to one that is more of a spectrum, rather than two separate concepts.

Alison Lurie described clothing to be a visual language, a language that was similar to music and poetry. As weird as it may sound, there had been a rule that segregated this language. This type of separation was one that was strict and kept to a single code: boys wear what are boys’ and girls wear what are girls’.

Though you may not realize it, there are certain fashion choices that’ll define an individual. Whether it be the style, color, fabric type or even the article of clothing itself, there are certain combinations that’ll define you. According to Brett Lunceford’s article on clothing and gender identity, our choice of attire is based off social constructs of gender norm, more so than “essential requirements for our bodies”. But how does this relate in terms of gender identities and media? Simply speaking, clothes highlight certain features and characteristics of a person. Clothes worn by men had to highlight the masculine attribute of strength and dignity whereas women wore attire to display kindness and softness (Arvanitidou). Mainstream media, often will depict these characteristics through the images –just look at the contrast of the two advertisements below. Many studies agree that fashion and clothing is aiding in the gender social construct because of the large presence clothes have on a person. With people being labeled either a “man” or a “woman”, people tend to judge one another’s appearance in order to see if they fit into the correct group of the two. Media has reinforced rigid borders that separated gender identities –restricting their depictions of stereotypical features. 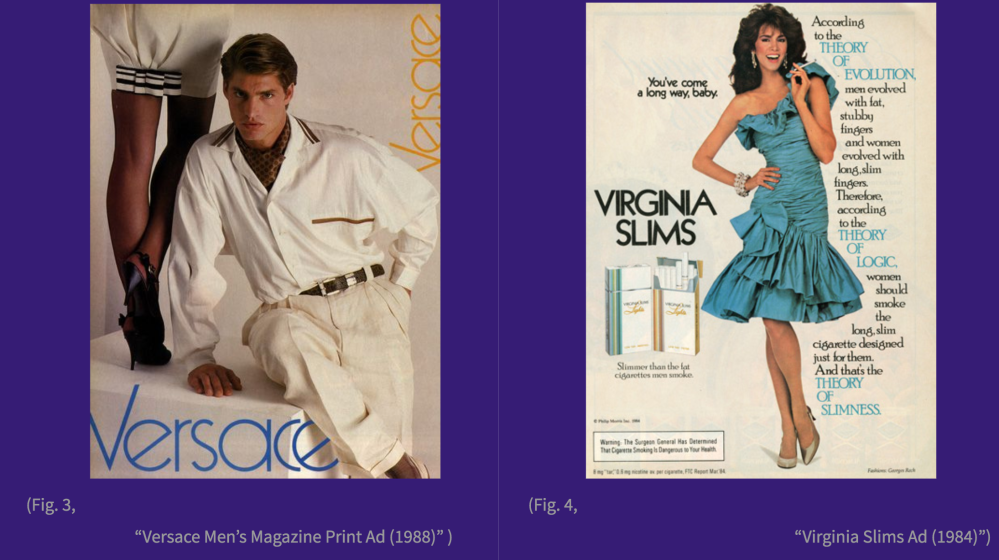 Now, blur the line identifying who should wear what. Completely erase the rule where boys and girls wear different clothes. Why? Because it’s not right. Its thoughtless to say that society should follow a criteria according to gender. Individuals are individuals, and they have the right to express freely who they are. And social media is helping change the way we see genders. Social media stars and so-called “influencers” –a label now used, which I find genuinely fitting– are transforming the way clothes define gender. As one of many mo

dern-day influencers, Jeffree Star has over 5 million followers on his Instagram. “Why in the world would he have 5 million follower?” one may ask. Though he has developed recognition in the makeup industry, Star earned his following by completely ignoring the social construct of gender. When scrolling through his Instagram, you see how happy and comfortable one can be with attire suitable for a person. Star poses with luxurious “womenswear”, his tight fitting and blinding pink outfits far from the image of abnormality. Star is not the only one destroying gender norms in

fashion, Ruby Rose uses her platform of 12 million on Instagram as well. Identified as genderfluid, Rose tosses “feminine wear” and “masculine wear” on her Instagram page making a name for herself as one of many androgynous models. With no true limits or control to what is on social media, people are free to show who they really are. Whether it be a man wearing dresses or someone without a true classification, social media is introducing a new age of genders identities and classifications that allow those to embrace who they really are. Instagram is now becoming the new outlet  of self-expression, yet some argue that it merely just a social media app. 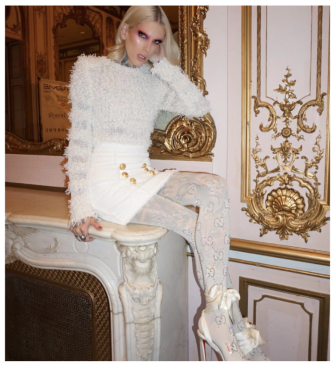 So have we really changed as a society? Yes, I think we have. It is not only social media that is accepting of a gender spectrum rather than binary code of gender, but it is also traditional media as well– advertisements. Fashion advertisements are now jumping on the bandwagon of going against gender positioned attire and gender identities. It is not just small Indie brands promoting a spectrum but large high-end brands as well. To promote Louis Vuitton Series 4 womenswear line, Jaden Smith is featured wearing a skirt. This goes for the Gucci 2016 Summer & Spring collection as well, where a female is centered wearing the men’s line. As shocking as the concept may be– and not that it should be– it was not an unusual sight. With mass media being more accepting of a gender spectrum, gender identities are changing to be more fluid.

So at this point, you should at least acknowledge that media is now shifting its outlook on gender role and identity. It is inspiring to use social media in order to voice who you really are and then being able to shift the attention mass media to do the same as well. Media is now showing that there are not just two genders and limits to what you wear. Instead it is promoting individualism and freedom to wear who YOU really are. Though the sight of a man wearing a skirt is not an everyday sorta thing, you do have see that this situation is challenging the chicken-and-egg-situation.