This month, I interviewed Por Jaijongkit (CO’17). Por is currently a sophomore studying at Emory University located in Atlanta, Georgia in the US of A.

Here’s what she had to say!

What are you studying? Why did you choose to study in this field?

I’ve recently decided to pursue a double major in Creative Writing and Environmental Science. I’ve always had a love for creative writing, so I’m very eager about pursuing it in an academic setting with writing geeks such as myself. As for environmental science, I really got into it thanks to Mr. Park in DP and became really fascinated by how all of earth’s systems link together, and how it gets even more chaotic once humans are factored in.

I also find lots of writing ideas in environmental science. But what really pushed me to pursue it academically was a discussion I had with one of my professors who said something along the lines of, “While scientists are smart, a lot of the time, they have trouble writing for non-scientists.” And I have a chance to help fill that gap. So why not

What advice do you have for students in MYP and DP?

Make the most out of a small setting! I know KIS has grown a lot since I graduated, but I’m pretty sure it still doesn’t have 7,900 students. So join activities and clubs, take initiatives, try a competition and know that there isn’t a heavy application process for everything you do. It’s a good way to get yourself out there and try new things, which will make it easier to help you find your place after KIS.

Completely unrelated to the previous point, but if you suspect you’ll miss home, learn to cook some home dishes.

What do you love most about your university?

All the knowledge I have access to. There are esteemed and accomplished professors all around who are willing to discuss and share their work. You also make all sorts of friends who pursue all sorts of things. I have friends who are computer programmers, pre-med students, history geeks, aspiring linguists, and I’ve learned a lot from being around them. The library is also massive. Sometimes I just meander through the shelves and just marvel at all the information there is. I recently checked out a book regarding astrology mythology of the Ancient Greeks for the heck of it.

What do you miss most about KIS and Bangkok?

Definitely the food. I’m going to scream if I have to eat another piece of grilled chicken breast and a salad for dinner. Even though I’m nowhere near the coldest place in the Americas, I also miss the warmth of home. I’m bundled up in jackets for 80% of the school year because I’m cold if the temperature ever goes below 21 degrees Celsius (it’s shorts and T-shirt weather for everyone else). And, of course, I miss all the friends I’ve made back home. 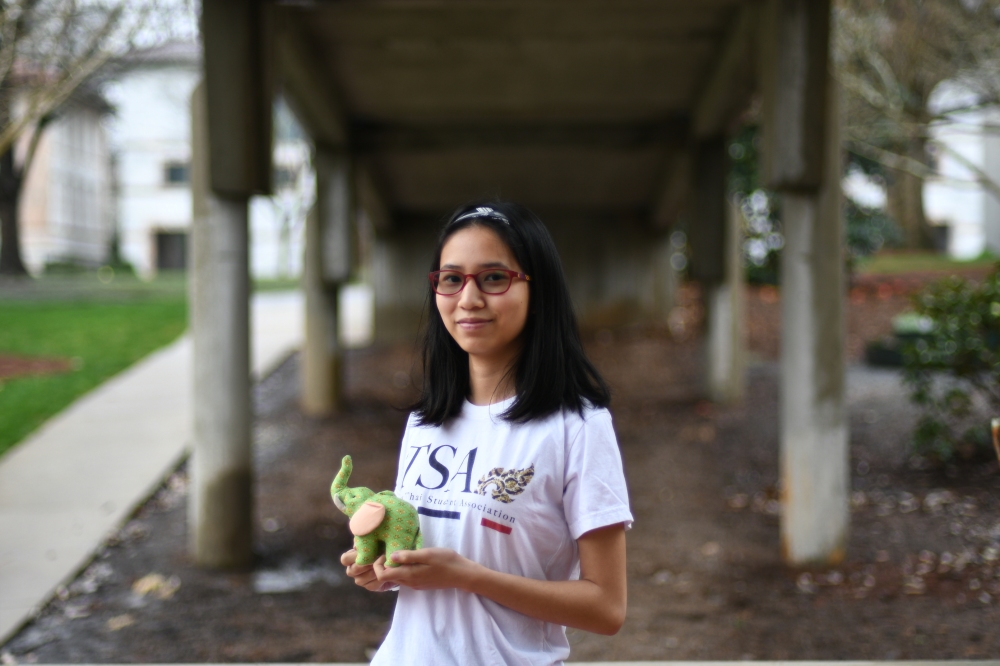 Why did you choose to study at Emory University?

Emory is known for its Creative Writing program (and medical studies, but that’s not what I’m here for), and is not shabby in any other of its academic disciplines, so I have the choice to pursue anything else if I want to. I’m also given the chance to double major in more or less anything I want. It’s also not a massive public university where I’ll be completely overwhelmed at the sheer size. And the most important part? It’s in the south so it’s not absolutely freezing in the winter (2-3 days of snow a year).

What are your future plans?

I have no idea. Maybe a screenwriting internship in one of the upcoming summers? Try to get a book professionally published at some point? Getting more of my friends addicted to Thai food?

What advice do you have for aspiring writers?

I think one of the things I learned in my years of sitting at my computer and typing away is to not worry too much about originality from the get-go. I think it’s important to try to be refreshing, but I don’t think it’s worth it to go on a wild goose chase to try to come up with something radical since, more or less, everything has been done. Instead, focus on writing what you want to read, and your own unique spin on a concept will reveal itself.

How have you contributed to the university? What clubs, frats etc. have you joined?

Most of my extracurricular activities at Emory have been with the Thai Student Association hosting cultural events and promoting them, sometimes working with other Asian cultural clubs. I’m also working with a friend on starting something we’re calling the Emory Writer’s Guild, which will be a place for aspiring writers to come together as a place to bounce off ideas, to discuss projects and ideas, to provide feedback, and create a strong community of writers at Emory.

Do you continue to exemplify the IB Learner Profile even though you are studying in university? How?

I am a KIS graduate with the IB Learner Profile in my veins. Being knowledgeable is a given in classes, and professors love excited, geeky students. I think open-mindedness is particularly important at university because you meet people from all sorts of backgrounds who’ve had completely different lives and potentially entirely different worldviews. It takes openness and willingness to understand them. Being reflective is also important because now that no one is telling you to reflect, it’s up to you to figure out how you want to improve yourself.

How has the IB program prepared you for university?

I feel like the IB program has given me skills and experiences to smoothen out my college experiences. I’ve grown more accustomed to writing papers and lab reports, and some of the content from the IB has come up again as well. IB has also already given me experience in dealing with a rough academic workload, which makes those times in university a little easier to navigate.

Do you feel that KIS and IB Curriculum prepared you for University/your career and how?

I think KIS was a big help, from citations to working with scientific write-ups. (Special shout out to Ms. Alison because I would not be surviving Emory’s Chinese classes without all the vocabulary she decided to cram into us in DP.) The one thing KIS couldn’t really prepare me for was my going from a small pond to a giant lake on the other end of the earth, though it definitely gave me the international mindedness mindset that helped me reach out to so many of my new peers. IB helped me waive some requirements and classes, but what it’s really good for is a conversation starter. You can start friendships by discussing the trials and tribulations of the IB.

Can you think of any advantages you may have had over students coming from other backgrounds?

I feel like the IB is good practice for a Liberal Arts college when you still have to juggle some subjects you’re not the best in. Other than that, I think my greatest advantage here is the fact that I am an international student. I have within me a world that most of my peers have never experienced, and I can share that. For example, sometimes I set my short stories in Thailand where I can really flesh out the culture and atmosphere, exposing my classmates to a new setting.

Are you open to me sharing your email on the site if students want to contact you?

Of course! Feel free to reach out to me at pjaijon@emory.edu if you have questions about anything!

And if you’re interested in reading my writing work, I’ve actually given copies of my work to the KIS library under my pen name Pandonia Jeanette. Note that they’re not books published by official publishers; They’re books I printed to show myself the fruit of my labour. The first book is Soulstrings which I wrote for my G10 Personal Project, and the second book is A Trail of Golden Thread that I finished during G12. I’ve recently finished the draft of my most recent book, so I’d like to sneak that into the KIS library this winter.

This wasn’t part of the interview questions, but this is something I wanted to share anyway. I went back and read some of the previous Alumni Updates posts before I answered these questions, and it looks like these updates almost paint a paradise of higher education. Everyone looks so happy, and I’d like to think that for the most part, they are.

I just wanted to share that while I love college and my life in it, it’s not always sunshine and rainbows. There are days where homesickness hits and where it feels like too much is happening and you just want to sleep for three centuries. Sometimes it feels like it’s hard to make and keep friends because you don’t share any classes or club activities. There are days where you sick and you feel like you’re dying in bed. And every now and then, you might feel like you have no idea what you’re doing in life and you’re a mess while everyone else looks like they have it all figured out and are just so put together.

Keep in mind that these moments hit everybody, even though they don’t always show it. College is a rollercoaster. A fun, free rollercoaster that makes you want to scream a lot of the time for all sorts of reasons. But more often than not, sleep, a supportive friend group, and hot chocolate will help you make it through. 🙂