Because farming animals encourages a rise in global temperatures, scientists have been trying to find alternatives to traditional meat. According to BBC’s reports, around a quarter of the greenhouse gas emissions that are driving up temperatures are estimated to have come from agriculture. For instance, methane and nitrous oxide is emitted from cattle in large amounts, and the use of commercial fertilisers releases additional ‘harmful’ gases into the atmosphere. This complicated process includes collected stem cells from live animal tissue and then grown until a sufficient mass is achieved. Researchers have clarified, “Per tonne emitted, methane has a much larger warming impact than carbon dioxide. However, it only remains in the atmosphere for about 12 years, whereas carbon dioxide persists and accumulates for millennia.” So even though the lab process involves harvesting cells and may reduce methane emissions, it causes more carbon dioxide emissions due to the high amounts of energy required. This leads to more global warming in the future.

The German designer, Karl Lagerfeld, has died aged 85 in Paris due to a short illness. Lagerfeld was the creative director for Chanel and Fendi and one of the industry’s most prolific figures. He was an especially recognisable figure because of his dark glasses and signature ponytail. The editor-in-chief of Vogue magazine, Anna Wintour has expressed he condolences as she mentioned, “Today the world lost a giant among men.” Alain Wertheimer, Chanel’s chief executive, has dedicated Chanel’s huge global success to Lagerfeld saying he was “ahead of his time”. “He leaves behind an extraordinary legacy as one of the greatest designers of our time,” a statement from the House of Karl Lagerfeld said. Lagerfeld was best known for his collaboration with Chanel, but he had also formed associations with H&M and Fendi and Chloe. When questioned on his signature unique appearance, he said his principle in life was, “I am like a caricature of myself, and I like that.”

In the 1990s a film was shot in Maya Bay, on the island of Phi Phi Leh,  located in southern Thailand. This film was later named ‘The Beach’, and it starred Leonardo DiCaprio. It was based around the idea of a man who finds a beautiful beach free from tourists. Since then, this once serene location had been overcrowded with tourists trying to get the ‘perfect selfie’ in this setting from the film. Numbers of tourists soared up in 2016 when Chinese tourists travelled in large groups to this popular location. Soon this small yet significant strip of sand and water began having 3,500 visitors a day. The land would get so crowded that sometimes tourists had no space to sit, relax and enjoy the view. Instead, they had to stand in the heat and make the most of their vacation. Due to the massive inflow of tourists, there was a continuous disturbance in this environment. This lead to severe damage to coral reefs and so the Department of National Parks, Wildlife and Plant Conservation came to an agreement that it should shut down in 2018. Now, tourists are permitted to only be present within 200 metres of the bay. After six months of this ban, there have been visible improvements in the environment. The coral has started to grow again, and blacktip reef sharks find it suitable as a habitat. The debate on whether the bay should remain closed is still on. The total area experiencing coral reef damage in Thailand has increased from 30% to 77% in just one decade, according to Prof Thon Thamrongnawasawat. This action could be a step forward taken by Thailand to preserve its resources. 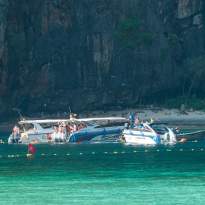 4. Fire in the Bangladeshi capital – Dhaka

On the 21st of February, a fire broke out in Dhaka, resulting in the death of 78 people. Haji Abdul Kader, whose shop was destroyed, said he had “heard a big bang”. He reported, “I turned back and saw the whole street in flames. Flames were everywhere.” It was reported that the blaze began due to the storage of flammable material in the ground floor of a residential building. The capital has narrow streets with close buildings, so it was easier for the flames to spread through fuel explosions. The narrow streets and insufficient water storage made it difficult for the firefighters to put the fire out, which ultimately took five hours. The affected area, known as Chawkbazar, is one of the most critical locations in Dhaka and was established approximately 400 years ago during the Mughal Dynasty. Unfortunately, the death toll is expected to rise as the search for missing victims throughout the area. 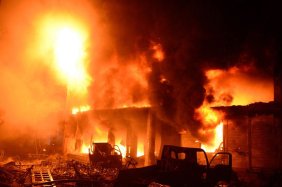 The South Korean brand has announced the release of its innovative, foldable smartphone, named the Galaxy Fold. Along with this, they have also recently released a 5G Galaxy S10 handset and three other Galaxy S10 mobiles. It will be available for sale in about two months, as declared by the Samsung team. Samsung has said this “luxury” item would unfold, like a book, to create a 7.3in (18.5cm) tablet-like display and would be able to run up to three apps at once. Moreover, Samsung says the phone contains six cameras – three on the back, two on the inside and one on the front – to ensure it could take photos in any position in which it is held. This release has expectedly resulted in both positive and negative reviews. One reporter, who was present during the announcement said, “What won’t work, however, is the price. I’ve been at many launch events like this, and normally the worst case scenario for the firms putting on the show is a lack of applause when the price is announced. Today we saw something worse – loud grumbles, even some laughter. $1,980? Simply too much.” Currently, this product is being seen as a possible question mark as it has high potential but significant uncertainty.