Even though this was a short week, I agree that y’all are probably relaxing and having fun but take some time to read the news as well. 🙂

Climate Change is moving faster than we are

The UN Secretary General Antonio Guterres has said that if our world doesn’t change course by 2020, it would be almost impossible to combat climate change. He wants heads of governments to come to New York for a climate conference next year in September. This was initiated after he realized that heatwaves, wildfires, storms, and floods have left us with a trail of destruction this year. He also claimed that corals are dying and oceans are also becoming more acidic, which is leading to conflicts over the limited resources. Even though the entire world agreed on a plan to tackle climate change in 2015 in Paris, the world is completely off track to achieving the goals. The world has enough tools and abilities and renewables are cost-competitive with oil and coal. Statistics reveal that by 2030, it is possible for wind and solar to power more than 1/3rd of Europe. However, due to lack of decisive political leadership, no achievements are being made. Several observers also believe that influence of Donald Trump’s decision to withdraw from the Paris Agreement and his overall skepticism towards climate change and multilateralism has led to negative thoughts in the minds of people.

The mobile market in developed economies is nearing saturation point as technologies such as Google, Facebook, and Amazon are starting to transform into fast-growing markets in Asia and Africa. India specifically, is home to the second-largest number of smartphones in the world with roughly 330 million in circulation. On the other hand, it is also home to the world’s largest offline population, with over 1 billion people as of 2016. Neighbourly, which is an Indian-inspired social network with an attempt to challenge Facebook and Whatsapp in the internet market, is expected to have 800 million users within three years. The application was developed after months of research in train stations, markets and living rooms, which helped researchers in coming up with two conclusions. Firstly, majority of the Indian shops work and socialize within 1-2 km of where they live. Secondly, due to escalating urbanization of the country, over 416 million people are expected to live in cities by 2050. Through Neighbourly, users will be able to ask others in their area for advice regarding various questions like “which is the best nearest Italian restaurant?”, “where is the nearest clinic?” and much more. In addition, the mobile data use in India has also drastically increased after the richest man of India, Mukesh Ambani, offered the country with a scheme nobody else could match: free calls and data for 6 months. With the launch of Jio 4G sims, Indian mobile data is the cheapest in the whole world. It costs as little as 15 rupees per gigabyte of data, and Jio expects to win many more users in a short period of time.

The Category 1 hurricane with winds of 105 mph, being the strongest since 1958 made landfall near Wrightsville Beach, just east of Wilmington. Evacuation warnings are in place for over a million people. In the North Carolina town of New Bern, rescuers rescued over 100 people from rising waters, but over 150 more had to wait when the conditions started to worsen and a storm surge reached 10 feet. By Friday morning, Florence already sapped power to over 437,0000 customers in both North and South Carolina. Over 1,400 flights along the East Coast were also cancelled since most of the airports are located along the coasts. As of now, 150,000 people are without power but energy companies have predicted that three million homes and businesses have the chance of losing power. Wind speeds are expected to weaken by Saturday when the storm slowly moves across the land.

The country has launched a crowdfunding campaign to deal with cholera after 25 people have died because of the disease, mostly in the capital, Harare. In order to prevent the spread of infection, an emergency has been declared and public gatherings have also been banned. In 2008, a cholera outbreak in the country had killed over 4000 people and caused an illness in 100,000 people. This particular outbreak began on 6th September after water wells in Harare were contaminated with sewage. According to the World Health Organization, the patients were not responding to first-line antibiotics which means that relevant medicines should be purchased as a matter of urgency. The disease has spread to five out of the ten provinces of the country. The health officials have advised people to wash their hands regularly, drink safe water, wash food and cook it thoroughly. People are also establishing a cholera treatment center and starting a vaccination programme. This was planned after 47 Africa governments pledged to end cholera outbreaks by 2030 by targeting to reduce 90% of cholera deaths by that year. The governments have also shut schools and have banned the sale of meat and fish by vendors in the affected areas to avoid the spread of the infection.

Koreas to open a “Liaison Office”

North Korea and South Korea have opened a “liaison office” that will enable them to communicate 24/7 on a regular basis for the first time since the Korean war. The office will comprise of up to 20 people from each side. The opening of this office is a sign that even if the talks between the North and US are not able to come up to a valid conclusion, the two Koreas are determined to develop closer relations. In the past, the two sides communicated by fax or special phone lines which would often be cut. The office, which is located in Kaesong, is the place where South Korean firms had once employed North Korean workers in a jointly run industrial park. Both sides are taking a step toward peace and unification of the Korean peninsula by discussing several issues, which will benefit them eventually. 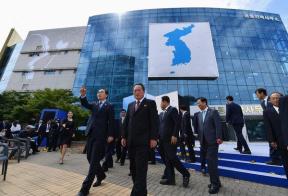